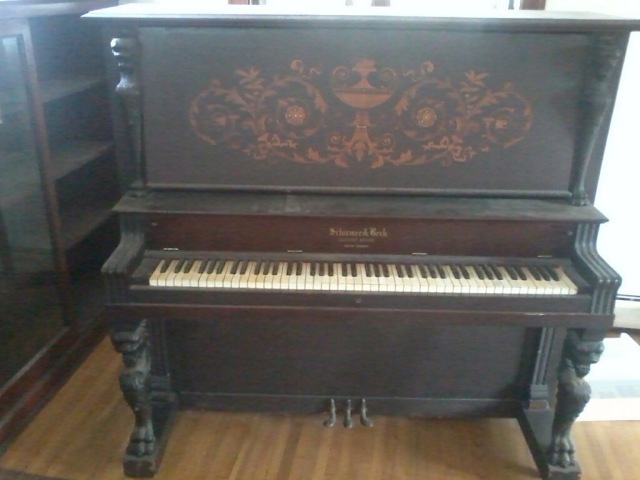 We recently received an antique piano. It was given to me by the sister-in-law of an old friend. From the minute I saw  the above photo I was in love.

I’ve stayed in love, posting detail photos on Facebook as if it were a new puppy or child and spending hours lovingly cleaning it as though it were one of those things. This is all a little strange given that not only do I not play piano, I’m not even particularly musical.

A few weeks ago there was a 90% possibility that our family was moving to New York. The possibility was upsetting and exciting and an ongoing emotional roller coaster. The most exciting times were when I would talk to my friends in New York and fantasize about how nice it would be to see them more often. My life in New York was going to be so glamourous and sophisticated. The hardest times were when I would think about leaving the life we have set up for ourselves here in Oak Park.

The most depressing time was when our realtor came over and began to explain to me every single thing that was wrong with my house. From the drop ceilings in the bedrooms (ceilings that were there when we bought the house from this same realtor nine years ago) to my 13-year-old couch with stuffing coming out of the arms (in my defense, it is covered with a cheap and poorly fitting slipcover, so you know it looks ugly, but not disgusting).

Seeing my house through this woman’s eyes was depressing. It wasn’t that it challenged my thoughts on what kind of homemaker I am, it was that it confirmed them in spades. My house is furnished in a variety of grad school and mid twenties purchases, interspersed with newer, very nice pieces. Our dining room table was bought in an antique store in my twenties. Our kitchen table used to live at my in-laws. My bookshelves are over crowded and the TV is so small that my kids have trouble watching shows like Electric Company because you can’t see the words on all parts of the screen.

Right after we were married my husband and I bought a cabinet at IKEA for our newly acquired china (which is chic and beautiful, by the way). We joked that one day it would probably go in the basement of our yet to be purchased house, it would hold board games. That day has yet to come (and oh, don’t get me started on the basement and its style).

As she was leaving our house our realtor (a very nice woman, whom I’ve always liked) looked at the stupidly-expensive Bruder Cement Mixer toy truck sitting next to the aforementioned couch. “Look,” she said, “you know I love you. I come in here and I know who you are. You’re a family who cares more about nice things for their children than a good looking couch. You’re a family that celebrates culture and books. You’re wonderful, your house is very comfortable, you just can’t sell it looking like this.”

I understand. I remember looking at our bungalow before we bought it and thinking about how great it would be to decorate it in all Frank Lloyd Wright style furniture. I remember thinking how our unborn children and their friends would play in the fantastically decorated basement. How clean and crisp and fashionable it would be.

But we are what we are, and what we are in this house is cozy. We are quirky and happy and just a little bit shabby. Our new piano arrived about a week after it became clear that all the strum und drang was for naught, we are not moving.

I love our new piano because it is over 100 years old, it is quirky and a little bit shabby. I love our piano because although it isn’t perfect, I love our life and our family. Also, I love it because it’s so freaking heavy and so hard to move there’s no way we’re going anywhere!

This entry was posted in Family Life. Bookmark the permalink.

2 Responses to The Piano