A Weekend at Ten 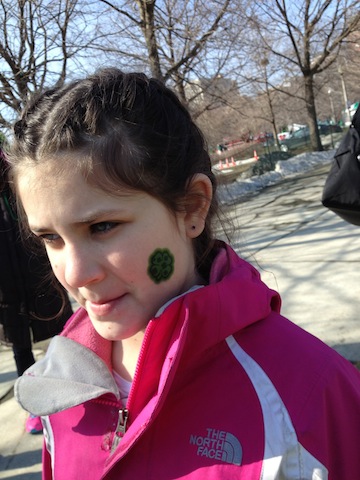 This weekend my daughter had Irish Dance performances. On Friday we rushed from Girl Scouts to the hair salon to get her hair done, then to her first performance. At the salon she wouldn’t talk to the people trying to make conversation with her, but sat patiently while a stranger pulled and braided her hair.

On Saturday she and I walked to the EL to go downtown for her to be in the St. Patrick’s Day parade. At the EL station we ran in to a group of girls and parents from her dance troop. These girls all go to school together and know each other well. My daughter goes to a different school and so we don’t really know them. It was comforting and fun to be in the group, but awkward, too. They had all obviously arranged to meet at the station, and while we were certainly welcome, neither my daughter nor I is the kind of person who is 100% comfortable with inserting herself in to someone else’s conversation. So we alternated between making small chat with others, and chatting with each other.

Some of the parents had younger siblings in tow and I was amazed at how easy and free things were for me. No strollers, no snacks, no large bags. Just my girl and me, holding hands and riding along. While we waited for the parade to start there was a little whining and some heavy leaning on me, an annoying insistence that I play a clapping game. But when it came time for the parade my girl shed her coat in the 30 degree weather and joined her dance line in front of the float. No complaints, no hesitations. She danced and waved, a beauty queen smile plastered on her face.

After the parade we went to the Art Institute for lunch and again I was amazed at how easy it was. I had nothing extra to carry. She found a table while I got the food. She sat, alone and unafraid in the loud, crowded room. I surprised her with a Cherry Coke instead of the usual water. We ate lunch peacefully and chatted. I wanted to see the Chagall windows, she did not, but agreed and stood patiently while I reminded her that Chagall was simply the French version of Segal. Then we went to our two favorite galleries. We walked along commenting on the art, like any two people in a museum.

After the museum we walked back to the EL. She clung tightly to my hand, a little fearful of the drunken parade crowds. They were mainly 20-somethings and I realized that these adults were closer in age to her than me. From the EL I dropped her at a party. A costume party with little girls shrieking. When the door opened everyone oohed and ahhed over her hair and her dance outfit. She did not even turn around to look at me as the door closed.

The next morning there were tears, huge tantrum throwing tears. We had tickets for a special Irish dance show at a downtown theater. She had wanted to go, but now, she was regretting her decision because she otherwise could have had a playdate with her friend. They wanted to get their Furbys together. Her inability to see that the dance show was an expensive, special event, whereas a playdate could be arranged at any time was infuriating. Luckily, her friend was free in the morning and the day was saved.

She and her friend played and baked with no adult supervision required and afterwards our family went off on the EL to the show. It was her third EL ride in two days and she did not stumble or falter. She sat and watched the show, no distractions needed and after that she asked to go to dinner at Rainforest Cafe, and we acquiessed. She was as thrilled with the roaring elephants and waterfall as she had been watching professionals dance on stage.

We had parked near the EL. When we got in the car her brother promptly threw up. She calmly provided him with a bag and tissues and when we arrived home she said, “Mommy, I’ll walk the dog so you can help clean up Joey.”

This entry was posted in Family Life and tagged ten. Bookmark the permalink.