Whatever Happened to Saturday Night

Posted on October 6, 2014 by advicefrommarta 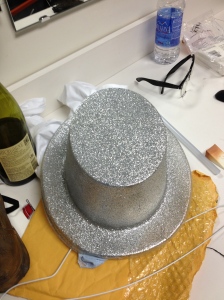 I was twelve years old the first time I saw The Rocky Horror Picture Show. My older sister was in high school and she had been going with her friends. My parents and I wanted to know what it was all about, so one Saturday night we went.

I wore a cowboy hat and boots because they were the only clothes I had that looked like they might belong to someone else. Under strict orders from my sister not to embarrass her, my parents and I sat in the back of the Vogue theater (but not “in the back row”).

It’s hard at 45 to try and imagine what I knew and understood about the movie at 12. I grew up in a house that tried to be as blasé as possible about sex and sexuality and so I do not think I was shocked by the movie’s sexual nature, although it would be years before I completely understood what was going on in “Touch a Touch Me.” I like to think that even at 12 I understood that I was not the naive Janet or the experienced Magenta, but rather the desperate Columbia. Manically tap dancing in an attempt to get someone to love her, Frank, Eddie, anyone But realistically speaking, that realization came much later.

My ability to be a manic tap dancer figuratively, if not literally, served me well and I became a mascot for my sister’s friends. They wanted me with them, if my sister did not. Off to Rocky Horror we went, over and over again. I went to the performing arts high school in part because in the movie Fame, they go to Rocky Horror. I took that to mean that if I went to a performing arts high school, I would finally find my people. I would find where I belonged.

The funny thing is, by the time I was a sophomore in high school I was pretty much done with Rocky Horror. We’d moved on to getting stoned and seeing harsher movies, The Wall, Repo Man, Liquid Sky. I only saw Rocky Horror a handful of times in high school and not again until my mid-twenties.

My best friend was marrying a man from Mexico and he had never seen it, so we went, not in costume, and once again sat in the back (but not THE back row). I remember this time finding the movie sad and being a little angry. I had seen this movie so many times and it was so full of lies. Living your dreams, being who you were, loving everyone did not bring you freedom and happiness, it brought you heartbreak and AIDS. I could not help but notice that Brad and Janet escape at the last minute, Magenta and Riff Raff go home, and Columbia dies next to Frank, still unloved.

Over the years Rocky Horror became mainstream. You could buy it on DVD and watch it in the privacy of your own home. The Time Warp became a Halloween song, and showed up on video dance games. Bary Bostwick played a bumbling sitcom mayor and then the grandfather in my daughter’s favorite Disney movie.

A few months ago though I got word that one of my dearest friends would be playing Frank, not in a shadow production for the movie, but in a production of the original play. And I thought, as Frank sings,  “I’m going home…”

I wondered what the young cast, even the oldest ones in their twenties closer in age to my ten-year-old daughter than to me, thought of this show. If any of them understood what it was like in 1980s when the movie started becoming a cult hit, let alone the 1970s when the play was first written. I wondered if the cast found the show sad or naive or stupid, or if maybe kids still learn something about themselves from it.

For me, seeing the show, hearing the music, remembering the lines again was pure joy. There is still a little bit of Columbia in me, but now I know that I am loved and so I do not dance quite so manically any more. I doubt my own daughter will be seeing Rocky Horror two years from now. She is a younger ten than I was, and will hopefully be a younger twelve. But I hope one day my kids do see Rocky Horror. I hope they find it funny and sweet, and a little weird.

Instead of my movie, I hope my kids find their own movie that speaks to them, that helps them find their place in the world, that helps them “stay sane inside insanity. ” When they tell me all about it, I’ll pretend to understand why they like it so much, but really, I’ll just be doing the Time Warp in my head.